Rotala sp. “Nanjenshan” is a fine-leaved plant with a very bushy growth habit. It comes from Taiwan, where it has only been found in one single location near the town of Nanjenshan. With its millimetre-thick lineal leaves it reminds a lot of Rotala wallichii, but unlike the latter, it is of a light green colour, sometimes with reddish shoot tips. Under lots of light, horizontal to overhanging lateral shoots will form. It was erroneously called “Mayaca sellowiana”, although there is no connection with this Mayaca species. It may look a bit like it, but it is not related. The plant grows to a wide bush when the conditions are favourable. The bushy growth habit can be greatly enhanced by trimming. Rotala sp. “Nanjenshan” grows best under relatively strong light and the addition of CO2.

Rotala sp. “Nanjenshan” is a delicate fine-leaved plant originating from Taiwan, where it has only been found in a single location near Nanjenshan. In 1993 it was introduced by Dennerle. Up to now, the species affiliation of this Rotala could not be identified, as it has not been known to fruit. Fruit, however, are crucial for identifying Rotala species. According to the Plant Finder on APC, it might be a natural hybrid of Rotala rotundifolia and R. wallichii; what can be said is that these two species are indeed found on Taiwan island.
R. sp. “Nanjenshan” is well-established in aquaristics and can be obtained in trade quite easily. The location name is often misspelled (“Nanjean”, “Najean”).
This Rotala was originally introduced under the erroneous name “Mayaca sellowiana”, which is the reason why many people assume that this name is a synonym of R. sp. “Nanjenshan”. This is incorrect, though, as true Mayaca sellowiana might look somewhat similar, but is a totally different plant species that has nothing to do with the genus Rotala.

The submersed very narrow-lineal leaves of Rotala sp. “Nanjenshan” grow in whorls and are of a light green to reddish colour. They grow to a length of 1.5-2 cm and a width of 0.5-1 mm. The number of leaves per node varies from 3 to 6. The leaf tips are truncate and sometimes have two points, like in many other fine-leaved Rotala species. The stem is green.
The emersed form of R. sp. “Nanjeanshan” has a creeping habit. Some of the stems also grow upwards, and there are 2 to 4 leaves per node. The emersed leaves have a very short stalk and are elliptic to lanceolate, 0.5 to 1 cm long and 2 to 4 mm wide. Emersed plants may develop small flowers with only 1 mm large light purple petals in their leaf axils.

Like R. wallichii, which is a little more difficult in cultivation, R. sp. “Nanjenshan” prefers soft water rich in CO2. Unhindered light and ample iron are important for the shoot tips to attain an intense reddish colour. Constant, well-planned fertilisation is crucial to prevent stunted growth and blackening. The plant may have some requirements, but it is not especially difficult in cultivation.

Sometimes the growing shoot tips develop an overhanging habit, which is an interesting design feature. A large group behind some Cryptocorynes or hardscape is a beautiful eyecatcher. In order to further more compact growth, groups may be trimmed back. Then, a large number of lateral shoots will form.
Rotala sp. “Nanjenshan” is a great plant for small tanks. 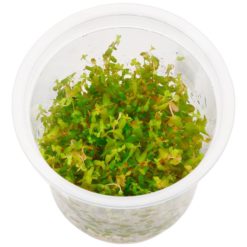 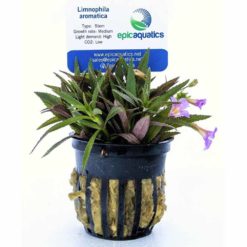 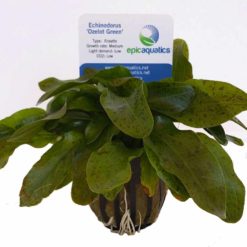